Last weekend everything was in the spirit of the BWP Stallion Approval. Here, both Levall (by For Pleasure) and Qornet vd Bisschop (by Cornet Obolensky) were referred to the third phase.

Levall also has an outstanding pedigree! He did not only inherit the qualities of his father, but also on the dam's side quality is anchored. His mother Bassina is a half sister of Alpapillon Armani (by Aldato), who participated in the Olympic Games in Hong Kong with Vincent Voorn. Also Oriander (by Coriander), who jumped at 1m60 level with Gianni Govoni and the 1m45 jumping horses Expo (by Linton) and Cassina II (by Up to Date) are half brothers and half sisters of dam Bassina.

In addition, Enzo Kerckhove competed in the Stallion Competition for 4-year old horses for the first time with Pharos van het Speienhof (by Zirocco Blue). They did an excellent job and jumped to a clear round! 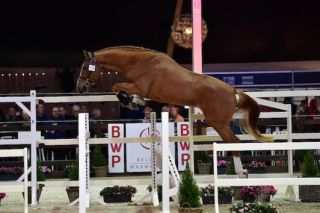